It’s one of those phrases, like “Damn the torpedoes!” or “Give me liberty or give me death!”, that all Americans know, but not everyone is sure they can explain. It’s a quick story but a good one.

Gage dissolved the GC because it was filled with men agitating for revolution. It was an attempt to stop the GC from fomenting rebellion amongst the so-far non-committal people of the colony. But whether or not they supported revolution, Massachusetts citizens were not going to give up their right to elect their representatives. They voted for representatives in the fall of 1774 as usual, except now those men would constitute the Provincial Congress. This Congress was illegal, according to the British Massachusetts Government Act that had dissolved the GC. It was not allowed to meet in Boston, and so gathered in Concord, northwest of the city. (Learn more about this fascinating 1774 vote at Boston 1775.)

So the Provincial Congress was in Concord, led by John Hancock, and a network of secret spy posts quickly went up between Boston and Concord. These were organized and manned by the Sons of Liberty’s Committee of Safety, which had one very active member named Paul Revere. The northwest precinct of Cambridge, a village called Menotomy (today’s Arlington) was just about at the halfway mark, and the Committee of Safety established a post at the White Horse tavern there. The posts were meant to send news from Boston to Concord about British plans and troop movements.

When the patriots in Boston found out from their spies that the British were planning to go out to Concord to seize an arms and ammunition cache, then arrest the members of the PC, Paul Revere, William Dawes, Samuel Prescott, and a few men whose names are lost to history made ready to ride out to Concord along the spy road to warn the town and the Congress. Word came that the British would set out from Boston on the night of April 18th. Now all they needed to know was what route the soldiers would take out to Concord.

This image, from the Paul Revere house website, shows the two possible routes: 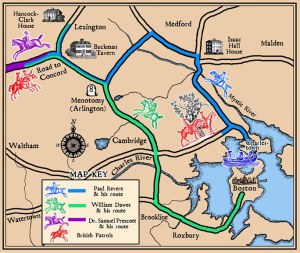 The “land” route is in green. The green line that begins in Boston actually covers up the thin, long neck of land that connected the city to the mainland, but there was a land line, and if the British went south, that would be going “by land”. This was a longer, more roundabout way to Concord, but it avoided the difficulties of the sea route.

The “sea” route is in blue. The little blue boat covers up the Charles River that lay between Boston and Charlestown. Taking this route, the British got to Concord a little sooner, but also got very wet embarking and disembarking and then marching through swamp land on the shore.

Dawes actually took off first, before Revere, going by way of the land route just before the British army sealed off the city. Revere snuck across the Charles River to Charlestown, illegally crossing the river at night, to warn the citizens that the army might be coming through at any moment. Revere and the citizens of Charlestown whom he had alarmed then waited for a signal from Robert Newman, sexton of the Old North Church in Boston, about whether the British were indeed on their way, or taking the southern route.

One lantern for the southern route; two for the river crossing. Two lanterns appeared in the steeple for less than a minute, lest they be sighted. The men of Charlestown began their preparations, hiding horses that could be commandeered by the British and getting word to their militia men to start for Concord. Revere got on his horse and tore down the spy road through Menotomy and Medford, “alarming” the citizens that “the Regulars are out!” (This referred to the soldiers of the British Regular Army.) When he arrived in Lexington, and the house Hancock and Samuel Adams were staying at, a man in the house was waked up by Revere shouting. He asked Revere why he was making so much noise in the middle of the night. “Noise!” retorted Revere. “You’ll have more noise than this before long! The regulars are coming out!”

The rest is history. The British completed their sea route to Concord, and a famous standoff ensued—more on that another time. For now, “one if by land, two if by sea” is fully explained for all, and makes a satisfying addition to our store of knowledge on our country’s founding.