Part 2 of our short series of excerpts from the high school textbook American History: A Survey focuses on this photo: 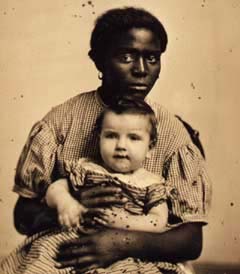 The photo is easily found online—we found it on the PBS site Africans in America. It is a photo of a black American named Louisa who was enslaved by the Hayward family in  Missouri. Here’s how PBS describes this photo:

Under the institution of slavery, African Americans and the white people who owned them lived in close proximity and developed relationships with each other. These were defined by the power imbalance between the people involved. They could be relationships of mutual compassion or mutual hatred, but they were an inherent part of daily life.

One of the most complex relationships was the one that existed between white children and their African American caretakers. White children were often in the unnatural position of standing to inherit the people who raised them, and enslaved nannies were in the similarly unnatural position of caring for the children who would grow up to be their masters. This picture, of slave nurse Louisa and her charge, H. E. Hayward, suggests the inherent tension of these relationships.

We’ve already quarreled in part one with the idea that “compassion” between enslaved people and the people claiming to own them as livestock could ever be genuine. Here we want to focus on the second paragraph, which to us is an accurate description of the image. The baby is happy. The young woman holding him looks sorrowful at best, wary and emotionally beaten down at worst. Her eyes, like the baby’s, are on the face of the Hayward parent or parents who wanted the photo. The baby smiles, while Louisa seems to feel all of the stress of being responsible for a white child. If anything happens to that child, Louisa will bear the blame and be punished accordingly. Her life and welfare hang on his. That baby is already her “master.” Any love she might feel for a baby in her care is marred by the fact that she is forced to care for him and not her own children, who may have been sold away from her, and by the fact that any love he might feel for her as his closest caregiver will be systematically and deliberately destroyed as he grows up, so that he will be able to sell her as livestock when that becomes necessary for his own personal enrichment. The photo is a haunting representation of the perversion of all natural human emotion that slavery depends upon, and that’s why it’s famous.

American History, however, has a different take:

NURSING THE MASTER’S CHILD Louisa, a slave on a Missouri plantation owned by the Hayward family in the 1850s, is photographed here holding the master’s infant son. Black women typically cared for white children on plantations, sometimes with great affection and sometimes—as this photograph may suggest—dutifully and without enthusiasm.

Again, AH‘s level of comfort with the terms “master” and “slave” is jarring. But then, perhaps that is what enables AH to criticize Louisa as unenthusiastic in her “duty”. That the editors of AH could look at this photo and approve a caption that belittles her fear and subjection by saying she has no “enthusiasm” for babysitting an adorable child is astounding. How they could critique her for just being “dutiful” instead of “enthusiastic” is completely inexplicable. It comes perilously close to the old “lazy negro” caricature wherein black Americans were depicted as lazy and sullen and unwilling to work hard.

We go on next time to AH’s thoughts on black abolitionists.