A while back we showed some photos from the wonderful Washington Post feature “What America’s immigrants looked like when they arrived on Ellis Island”. It’s a collection of  photos taken by Augustus Sherman at Ellis from 1892-1925. Sherman was the chief registry clerk at the immigration station.

Here’s what we said at the time:

His photos are wonderful because most of them show people dressed in their very best clothing, usually traditional clothes. While immigrants at that time traveled in their regular clothes because they knew the trip in steerage was dirty, they brought their best clothes to put on once they arrived at Ellis Island so that they would seem like presentable people who were a) not poor and b) good citizen material. They dressed to impress, and they had plenty of time to change during the long waiting periods between landing at the dock and being processed.

Adults and children alike were decked out in elaborate clothes. Women must have been sewing for months to create these wonderful ensembles. As the site points out, seeing these people reminds us that America has long been a place where a multitude of cultures mix on the streets, in schools, at work and at play. While immigrants did not wear these magnificent dress pieces every day, they did leave Ellis and make their way in America with them on, and brought them out on special occasions, making America a bottomless reservoir of cultural identity and expression.

It would be great if someone would create a similar archive of 21st-century immigrants.

And then we showed some of the photos. At the time, we were just enjoying the window onto the past they provided. But with all the (usual) scaremongering talk about immigrants that was generated by the Syrian refugees, we suddenly thought of them in a new way.

Look at this woman from “Ruthenia” (today’s Belarus and Ukraine):

Would this woman pass the very, very difficult screening process we have in place for refugees and be allowed into the U.S. today? It doesn’t seem likely. Headscarf, ethnic clothing… looks like a terrorist.

In fact, all the women wore headscarves: 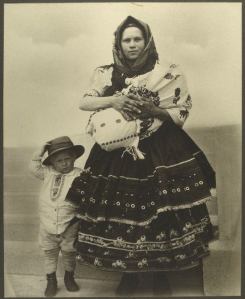 If headscarves are a red flag, these Slovakian and Dutch women would be held up for quite a while if they were screened today.

And what about these women? 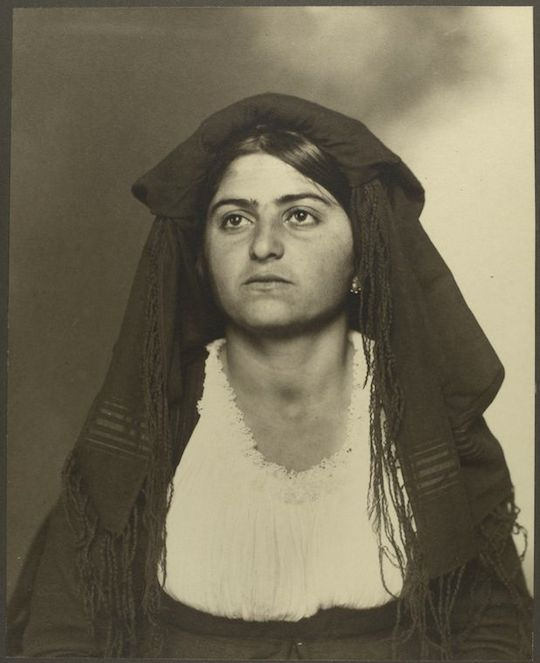 They wear headscarves and have strange looks in their eyes; the one on the left seems pretty angry. Both of them were likely deeply committed to a religion that most native-born white Americans rejected as foreign and dangerous to the U.S. government and American Way. Yes, they were Italian Catholics who whisked into this country without anyone checking to see if they were terrorists. This at a time when the U.S. government was actually suspicious of Catholics as agents of the Pope. Yes, the Immigration Act of 1924 would limit the number of southeast European Catholics (and Jews) who could enter the country, but they were never banned altogether.

This Algerian man would likely not get into the U.S. today dressed like this. Yet he successfully entered the country a century ago, and likely lived a quiet life. His descendants are probably living quietly in the U.S. today.

What about this guy? 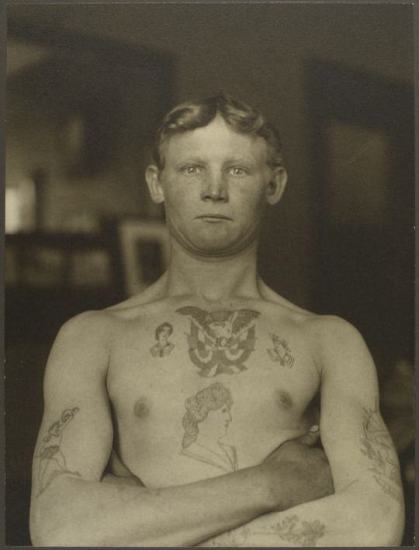 No way, right? But this German man successfully entered the country, likely with no more screening than the usual six-second physical at Ellis Island. 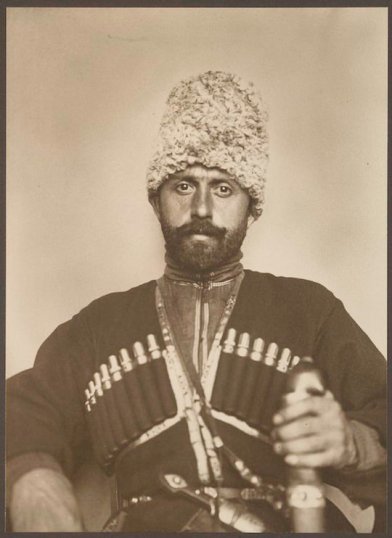 Are those bullets of some kind on his jacket? That seems like a knife in his belt. Whatever he’s holding—club, sword—is also pretty violent-looking. This man came to America loaded for bear. But he got in, and you know that he got his picture taken because of his “colorful outfit”.

We just weren’t scared of people like this a century ago because we assumed that anyone who came to America would see that it was the greatest society on Earth and toe the line. We believed that our society was strong enough to take in disparate peoples and turn them into Americans. We believed our society was appealing enough to win over our immigrants and make them real Americans who would live and die for their new country.

When did we lose that faith in ourselves? When did we decide that every single immigrant, man, woman or child, was a threat powerful enough to bring down our whole system and way of life? Why did we decide it? There have been acts of terrorism in this country before 2001, and they were usually (and usually wrongly) blamed on immigrants (think Haymarket). And we’ve passed stupid laws banning certain “undesirable” immigrants: the Chinese, the Japanese, southeastern Europeans (read Jews and Catholics). But the panicky idea that all immigration is a threat, that no one should be allowed into the country unless they’re white people from Europe, that every immigrant and even every refugee must go through the most rigorous, nay impossible screening process imaginable, is recent.

Here’s a rundown of what war refugees must do if they want to enter the U.S. today, courtesy of John Oliver:

Look, it is difficult to vet people coming out of a war zone, but it’s not like we’re letting just anyone in. We are the United States of America, not Arizona State. Because just for the record here, let me just walk you through what our screening process actually is.

If you’re a refugee, first, you apply through the United Nations’ High Commissioner for Refugees, which collects documents and performs interviews. Incidentally, less than one percent of refugees worldwide end up being recommended for resettlement.

But if you’re one of them, you may then be referred to the State Department to begin the vetting process. At this point, more information is collected, you’ll be put through security screenings by the National Counterterrorism Center, the FBI, and the Department of Homeland Security. And if you’re a Syrian refugee, you’ll get an additional layer of screening called the “Syria enhanced review,” which may include a further check by a special part of Homeland Security, the USCIS Fraud Detection and National Security Directorates.

And don’t relax yet, because we’ve barely even started. Then, you finally get an interview with USCIS officers, and you’ll also be fingerprinted so your prints can be run through the biometric databases of the FBI, the Department of Homeland Security, and the Department of Defense.

And if you make it through all that, you’ll then have health screenings which, let’s face it, may not go too well for you, because you may have given yourself a stroke getting through this process so far. But if everything comes back clear, you’ll be enrolled in cultural orientation classes, all while your information continues to be checked recurrently against terrorist databases to make sure that no new information comes in that wasn’t caught before.

All of that has to happen before you get near a plane.

This process typically takes 18 to 24 months once you’ve been referred by the U.N. to the United States.

This is the most rigorous vetting anyone has to face before entering this country. No terrorist in their right mind would choose this path when the visa process requires far less efforts. But nevertheless, the House still voted on Thursday to add a few more steps.

It doesn’t seem likely that anyone in the photos above would have entered the U.S. under those conditions. And that would have been a terrible injustice. Not every immigrant is an angel. That German guy probably got into a lot of fights. But we can’t be scared of immigration. We can’t put ourselves in a lock box and say “no more immigrants”. We have to believe, as we once did, that America makes Americans, that Americans can be made, not born, and that that is a source of our greatest triumphs as a nation.