Skip to content
thehistoricpresent American history, What History is For January 29, 2015November 27, 2017 4 Minutes

Part 2 in our series on Reading Famous American photos brings us to one of the most famous photographs in world history: Dorothea Lange’s Migrant Mother: 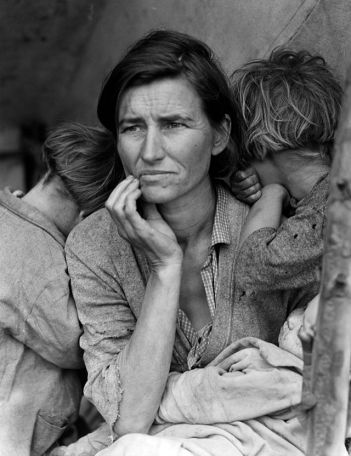 It was taken in 1936. The Library of Congress has annotated it thus: “Destitute pea pickers in California. Mother of seven children. Age thirty-two. Nipomo, California”. The woman stares into the distance, her brow lined with worry, trying to perceive a glimmer of hope in her desperate situation. Her two daughters hide their faces from the camera, but the mother does not even seem to see it. Her mind is working to find some way forward, some way to feed her children, including the baby almost hidden in her lap. Their clothes are worn and dirty. Never did the future for Americans facing the Depression seem so bleak; there is no guarantee that this family will come through intact. The photo is beautifully framed in a classic triangle: you look at the mother’s face, then travel down her arm to the baby, then back up to the girl on the right, and across to the girl on the left—and then back again to that expressive, strong, but desperate face.

That Migrant Mother was Florence Owens Thompson, a migrant worker originally from Oklahoma. She married Cleo Owens and moved with him and their three children to California in the late 1920s, where he had relatives, and they worked in saw mills and farms in the Sacramento Valley. Owens died in 1931, leaving Florence pregnant and with five children to support at the height of the Depression. Florence met Jim Hill and had three more children with him, supporting her family by picking cotton, doing manual labor in hospitals, working as a cook—anything to bring in money. The family was on the road in March 1936, looking for work in the fields after finishing a hitch picking beets. Their car broke down on the highway, near a pea-pickers’ camp. That was bad news; worse was to come. There were around 3,000 migrant workers at the camp, all unemployed after a freezing rain had destroyed the crop. There would be no work for anyone. As Hill and two of the boys walked into town to get parts for the car, Florence waited in the camp with the younger children.

At this point, Dorothea Lange appeared with her camera. Lange was a photographer working for the Farm Security Administration to document the human toll of the Depression. She took six photos of Florence and her three youngest children, and wrote these notes: “Seven hungry children. Father is native Californian. Destitute in pea pickers’ camp … because of failure of the early pea crop. These people had just sold their tires to buy food.” Later, Lange described her encounter with Florence:

I saw and approached the hungry and desperate mother, as if drawn by a magnet. I do not remember how I explained my presence or my camera to her, but I do remember she asked me no questions. I made five exposures, working closer and closer from the same direction. I did not ask her name or her history. She told me her age, that she was thirty-two. She said that they had been living on frozen vegetables from the surrounding fields, and birds that the children killed. She had just sold the tires from her car to buy food. There she sat in that lean-to tent with her children huddled around her, and seemed to know that my pictures might help her, and so she helped me. There was a sort of equality about it.

Lange sent her photos to the San Francisco News and to Washington, DC. When this photo ran in the newspaper, people were so moved and appalled by the conditions at the camp that the federal government sent 20,000 pounds of food to the camp. By the time it arrived just a few days later, Florence and her family had moved on to work at another farm.

So much is history, and legend. Florence Owens Thompson (she remarried in 1945), however, told a different story. She claimed that Lange never spoke to her at all, and just started taking pictures. She also ridiculed the idea that they had sold their tires for food—how would they drive the car if they sold the tires? “I don’t believe Dorothea Lange was lying,” Thompson said, “I just think she had one story mixed up with another. Or she was borrowing to fill in what she didn’t have.” Thompson also claimed that Lange had promised not to publish the photos. Thompson was humiliated by her family’s poverty and didn’t want it broadcast around the nation.

Luckily for her, the family’s name was never published, and the identity of the family and the Migrant Mother remained unknown until 1978, when a California reporter saw Florence in her mobile home and recognized her. The newspaper published his article that quoted Florence as saying “I wish she hadn’t taken my picture. I can’t get a penny out of it. She didn’t ask my name. She said she wouldn’t sell the pictures. She said she’d send me a copy. She never did.” There was no way for Florence to know that, as a government employee, Lange gave up all rights to her work and never received any money from the photo herself.

The photo became more and more famous as the single best illustration of the nightmare of the Depression. In 1998, it was put on a U.S. stamp—the first time that living people (the daughter on the left and the baby in Florence’s arms) were featured on a stamp. According to her children, Florence was humiliated all over again by the celebration of the photo, but when she became ill in August 1983, her children appealed to the public for help, and over $25,000 in donations for the Migrant Mother’s medical bills came in. For the first time, Florence felt like she was more than a symbol of failure and shame.

Florence Owens Thompson died the next month. Her gravestone reads “Florence Leona Thompson, Migrant Mother—A Legend of the Strength of American Motherhood.” Migrant Mother is rightly famous, but for Florence’s sake, this photo should have its due, too: 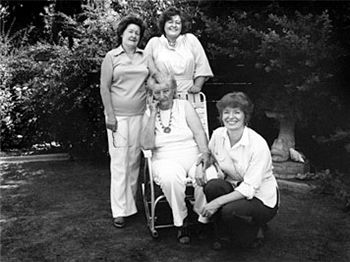 This is a re-enactment of the photo taken in 1979. Katherine and Ruby stand on either side of their mother, and Norma, the baby in Florence’s arms, kneels beside her mother. Florence managed to provide for her family and get them through the Depression, despite all odds. Katherine’s tribute to her mother is fitting: “We never had a lot, but she always made sure we had something. She didn’t eat sometimes, but she made sure us children ate. That’s one thing she did do.” Next time: Raising the Flag at Iwo Jima